The Share Market does not like arrogance. I have been shorting Aurobindo Pharma Futures for last 3-day trading session and made good profits. Today, it was very high risk and hence I was away from touching it too. But I shorted at 688 with my utter arrogance that it will be profit and tanked a loss as it reached 692.

The Share Market is ruthless and doesn’t care for anyone.

2. Know Your Limits to lose money in Stock Market-

Accept losses and move forward. I didn’t have enough limits on my margin to carry forward my trades but I took a risk by selling INFY17FEB980CE today.

But Infosys share price was growing steadily. I was unsure if I would end profitably at the time of squaring off. I accepted the loses but I thought of battling it. The market was still 2 hours to close.

I extrapolated. I averaged out but on INFY17FEB1000CE. It went well. So never lose money in Stock Market without a fight! 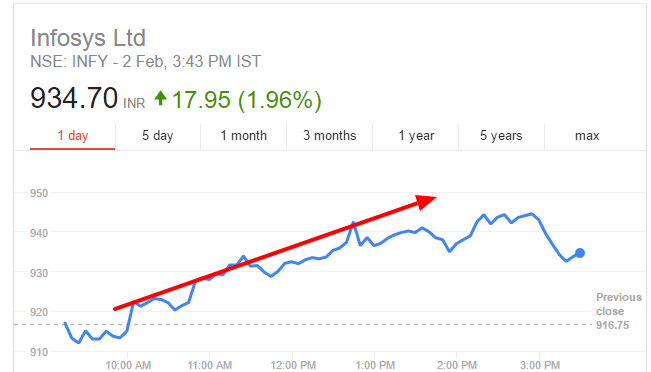 Compulsive trading is not a good strategy and makes most people lose money in Stock Market.

In my slack channel I had shared a positional trade on Satin. I entered Satin at 344 and wanted to hold till it crosses 500. Probability of profit is damn high, so does the stock beta. It has been a way much of side trend and is in need of trading invitation.

Yesterday morning (2/2) a guy messaged me saying if it is time to short Satin. Because he ‘feels’ price went high and it will fall down. I asked, “What’s your analysis?” He said he just felt.

That’s wrong thing to do, right? The correct thing to do is to let the profitable trade run with a trailing stop loss.Guess what happened next?

A trading invitation! And it was a confirmed one based on volumes. Don’t do desperate experimentation with your hard earned money!

PS: If you do not know what a trading invitation based on volume means, then I suggest you reading the book How to Make Money in Day Trading: Trade on an Invitation by Mandar Jamsandekar

I am long on ONGC futures and short on Justdial futures now.

People on TV was yelling like NIFTY will cross 9000 in next 2 days. All the bull analysts were yelling at TV. But it opened on a flattish note next day.

Well, I was a bear instead of bull on NIFTY. Though I am bullish with BANKNIFTY, I believe NIFTY IT and NIFTY Pharma will drag it down. There is more trump pain to come and the market is a due correction for sure!

My trailing stop loss closed it at 55 today. Still, positions are opened at the average price of 74. Let’s see. So always use your own head. The TV and media aren’t God.

Day Trading was my trade of the month. My portfolio doubled within one trading session this month. Thanks to media. Well tons of people lost their money on speculation. It’s one of the greatest lessons to not lose money in stock market.

On 24th January, Ajanta Pharma started dropping like Divis Lab. My portfolio beta triggered as I had few shares. I also got an SMS (used Twilio API in code). I started to look at news sources closely.

The News that caused this mayhem – Ajanta Pharma got its license canceled in the US. But the truth is – It is just a product that got banned which wasn’t even launched.

I liquidated everything to clear margin and bought futures as I hear the end of the sentence of the Company Spokesperson. But it created a synthetic downfall. So the stock is good to buy as of now!!

So does Divis Lab!! Get as more as you can.

Edit: Satin and Divis Labs has grown 3.75% and 5% the next trading day respectively. Hail Daytraders 🙂 Originally posted at Quora.