It is said that more than 90% of the traders are interested in day trading. But we rarely heard of successful day traders –

Normally people consider things which they don’t understand to be of high value and of great importance. That’s why day trading is a hype. Normal People don’t understand the complexities of the underlying principles that drive the stock market. Every single up and down are driven by many factors.

The highest risk trade I did is Idea. Here is the story – I sold Idea at 86.31 with 2 lots. I thought it was out of Bollinger bands and will come down soon.

My previous winnings clouded my mind with arrogance. It closed at 99.65. I lost around 93380 INR per lot. It was depressing and the lesson well learned.

So I lost 2L on a trading capital of 5L.

The whole night I calculated on Idea. Extrapolating the projection curve and with dozens of methods. I pushed in 10 lots next day at that same price I closed yesterday. But it is a buy this time.

I pushed more money into the account and bought it with full on leverage. Imagine the power of having 35k shares of a company with you like a mini-promoter.

We have a slack channel where we Intraday traders have a separate thread to talk. You can join too! 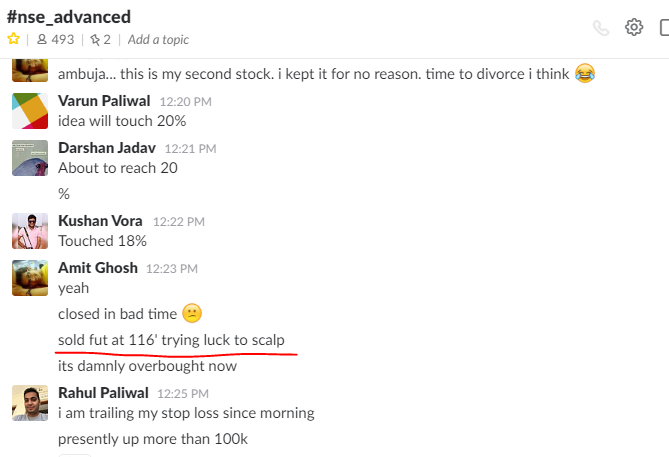 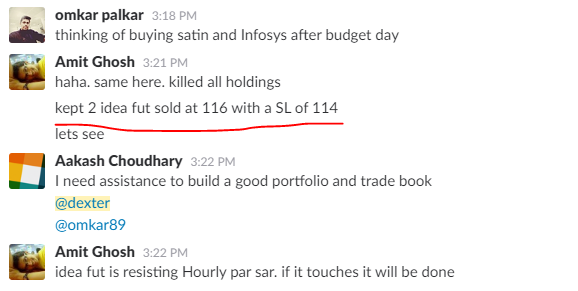 I was confident based on the technicals only that I sold 2 more future positions which I closed today in 105.

Let’s Leave the money. Here is the question –

My spine was broken seeing the loss; I almost spent two hours on the rooftop seeing that huge loss during market hours with a smile on my face trying to fool myself that it will come down.

What sucks up most in the journey of being in the group of successful day traders is the Ego.

That’s pivoted us to take an emotional decision instead of a data driven on based on tiny profits made previously. And due to loss aversion, we generally cut the profits first and run the losers.

So, 9 trades with small profits get sucked up with 1 trade of big loss!

Losses never matter. What matters is if you end the session profitably. Analyze and don’t make that fault again.

Most of the traders don’t come back after the loss. They keep cursing. I’m sure my fellow day traders will be along shortly to add their two cents. Sit tight.