The Classic definition is, “When a scrip makes higher highs and higher lows; that scrip is considered to be in an uptrend.“

But as discussed in the definition of Swing High, the terms “higher highs” or “higher lows” are relative to another candle i.e. This candle A has higher high than candle B. It’s impossible to get a perfect uptrend where the candles keep making higher high all the time. Right? Now, what do higher highs and higher lows means in case of a scrip? What we are comparing here? 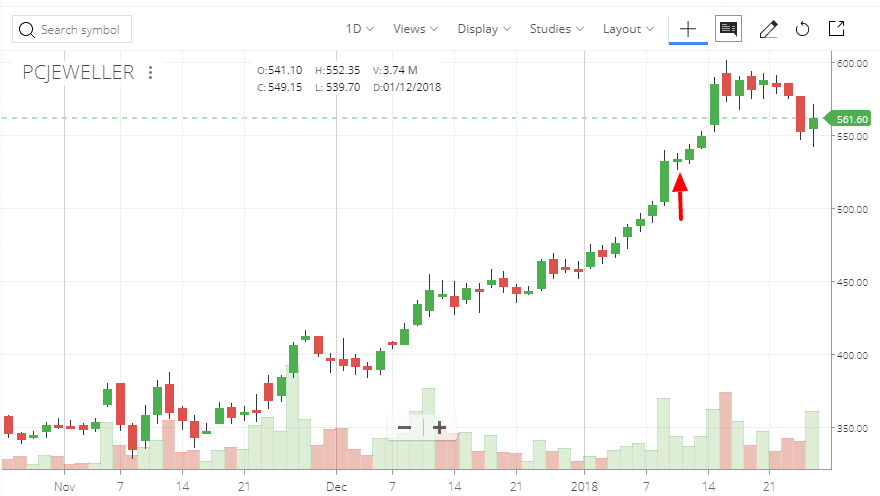 If we are comparing candles, then, In the above chart of PC Jeweller, it is quite evident that the stock can be considered to be in an uptrend but this is not an uptrend as per our classic definition. It was so bullish that it ended green straight nine days but in middle of that bullish momentum, the marked candle’s high is not higher high than the previous candle i.e. it is lower than the previous day’s high.

Now, classifying a stock’s trend becomes dependent on people’s perception as the definition itself is not mathematical and definitive, like 1<2. Instead, it is based on slight speculation. To remedy that, the concept of peak and trough kicks in.

Here, PSH and PSL are marked! Perfect Swings consist of five candles which are dependent on each other. Now, due to the noise of the stock market, it is highly likely that one candle makes an obscene move and invalidate the entire setup.

But if you plot all the Swing Highs (SH) and Swing Lows (SL), the number of swings will be too many and unless we’re looking at very higher time frame – Most of the cases we will be getting sideways trend due to noise!

Let’s analyze the case of Aarti Industries once again! It made a Swing High but didn’t satisfy the condition of Perfect Swing High because of one candle.

Now, the question is how to define candles like Aarti Industry? The condition is – We are looking if the previous two candles and the next two candles of the Swing High is a Lower High. As long as high of 3 is lower than 1, we are not seeing if it is lower than high of 2. We call it, “Peak”.

Similarly, If the previous two candles and the next two candles of the Swing Low is a Higher Low, We call it “Trough”. So, by definition, all Perfect Swings belong to either Peak or Trough.

As we are considering Peak and Troughs, we have reasonable data points to define a set of rules. Now, before we jump on defining uptrend, let’s talk about some psychological aspects –

Let’s take the case of Swing Lows. Being a pivot point, tons of buyers keep a stop loss at a Swing Low. Sometimes, due to tons of Swings, people either shift to a higher time frame or don’t move their stop loss (hence, support). Now, If two days are passed and a Swing Low is not broken, it is definitely more significant and convincible support than normal Swing Low.

In the above example of Justdial, the huge shadow of the last candle definitely had blown stop loss of most buyers making the setup invalid.

We had a speculative (It was speculative because the setup was not complete and we’re betting on the completion of the same. ) buy setup in Just Dial –

But, We exited at a correct time making a profit.

Now, to complete the Perfect Swing Low as per our initial idea, it can not break the low of the previous candle. Also, the more important point was Just Dial had results. As we were sitting in profits, the risk (i.e stop loss) became too higher and the rest of the reward (i.e. Target I) considering we had results which are a very unpredictable and volatile event!

So, Just Dial hit resistance and we closed the trade! It is advisable to close the trades before any unpredictable and volatile event unless the risk is reasonably less for the reward in the trade.

Here are peak and troughs plotted in Havells –