This is just an example of the use of the full application of Bollinger. We don’t intend you to understand it at all because we will go through each minor stuff in detail in later sessions. But feel the potential of the simplicity of this trade setup.

Right now as you can see our first two targets have been hit. Our third lot is open with a trailing SL at median Bollinger. 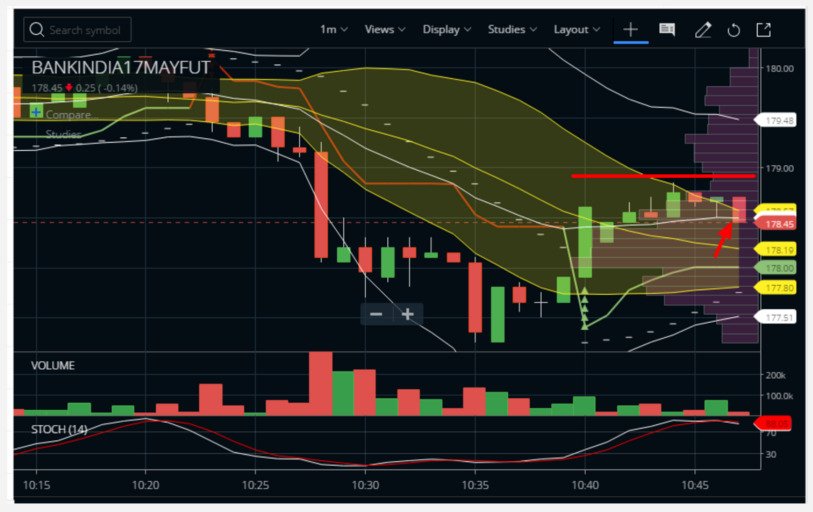 One needs to check with a combination of timeframes, VPA and support setup. Right now crossing that line will create a spike.

It spiked downside when it crossed the lower line of price action which mostly tends to form in the median Bollinger when the trade reverses. (That’s the reason for choosing median Bollinger as Trailing SL)

Unless Price action is created it is a VPA barrier and hence trade reverses. (That’s the reason for choosing median Bollinger as Target Price)

But our trailing Stop loss got hit. Though all ended is in profit we intend to open that last lot again if it breaches this line of price action on the upper side.

In advanced Bollinger, it’s all SAR setup (Stop and Reverse) whenever a stop loss turns into a trailing stop loss. Right now the script will fuck downside for a moment till it breaks the upper barrier. So why not ride that considering we have already made a good profit to take the bait?

Now we are f**king on both sides by riding the trend in microscopic level on both sides. In short – when one hits trailing SL it is a SAR trade. 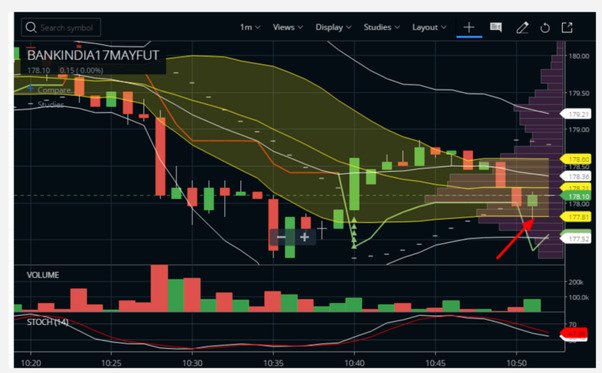 Right now This candle’s high is current Stop-Loss. But here is an application of candlestick – We see Doji now. Close the trade. Hence we are slightly in profit than breakeven. 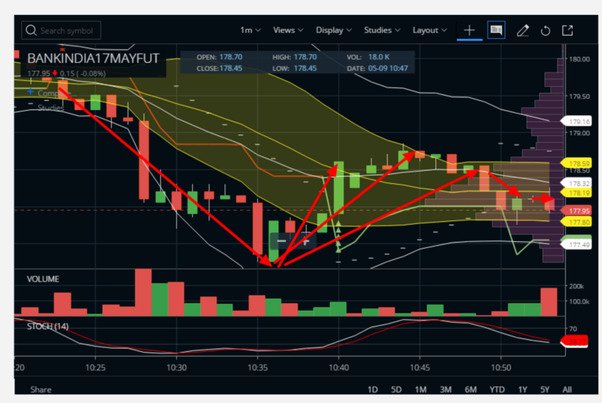 We fucked 6 times in total as of now. Sorry for my rough language. But use the above picture as a reference to visualize my trades –

Now, this doji case came. Doji tells to close the trade because it means price action may make a huge move but it doesn’t tell which side. 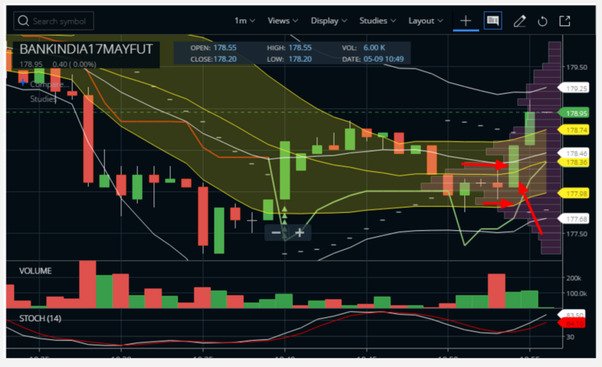 So, how to use this Doji setup. This Doji doesn’t have any tails. So when the second next candle is formed after Doji, we put both buy and sell on the H and L of the previous candle.

If Doji doesn’t make any tails continuously for 4-5 bars. We take H and L of the candle which creates the spike.

Because breaking of that candle confirms the direction. Hence we ride wherever it goes.

So we enter with two lots because of our exit strategy. Now you can see the first target has been touched. Now we are running for the second target keeping our first target as trailing stop loss.

Our original stop loss is the lower spike of the previous candle on which we took position i.e those Doji Price action levels. 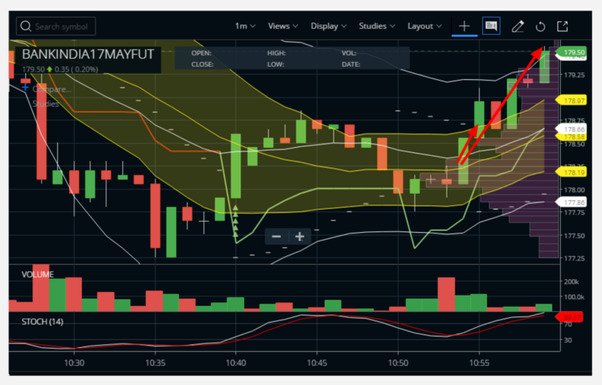 But if you follow BRS you can keep the last lot open with trailing Stop loss of price action instead of stopping at the just upper band. 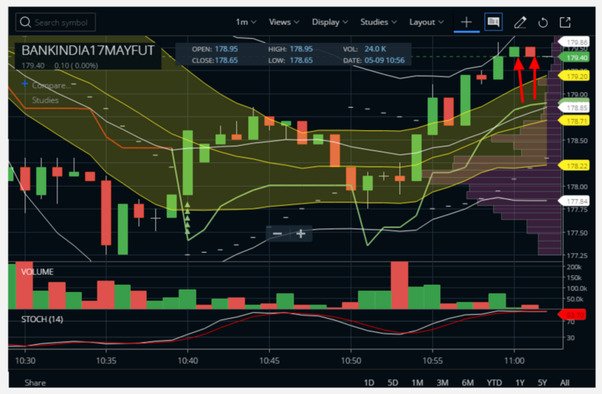 So, it hit our trailing stop loss but as the stop loss is trailing in nature we immediately open a short position due to our SAR set up with the stop loss at price action. Please refer below image- 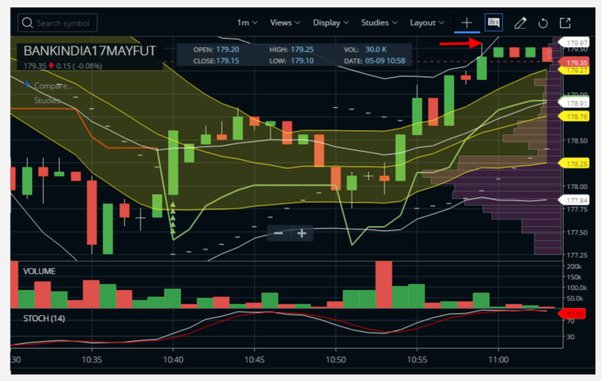 Our stop loss is hit and we’re finally out of the trade. 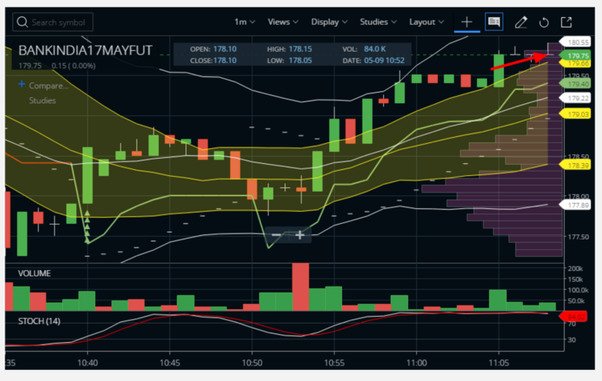 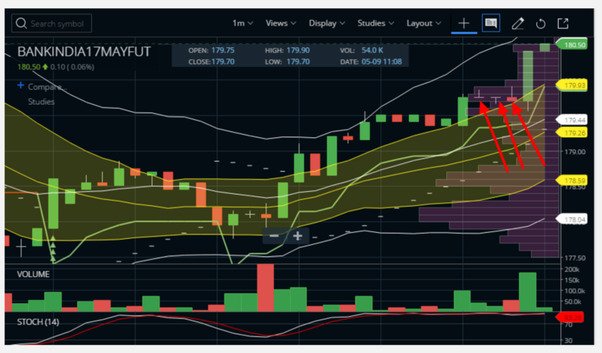 But we shall try to explain in more details to avoid confusion. You can see what I did in which candle as marked on the image above –

Now VPA (Volume Profile Analysis) will come into play. We’re putting our stop loss on 180. Technically by the old method, our stop loss should be at 179.5 but why not use VPA If we know it. 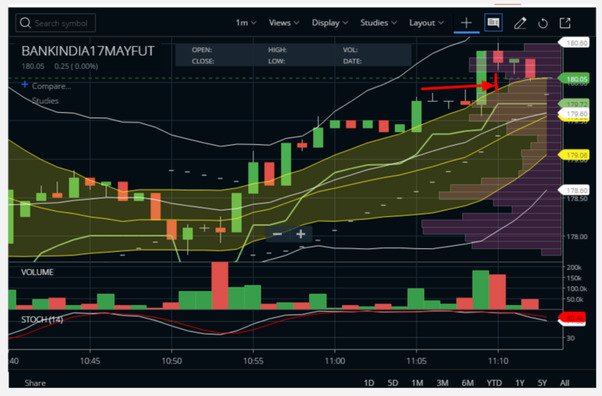 So our stop loss 179.95. Now as you can see It did come to 180 for sure. 180 is a price many people will buy sell. These kinds of points break the probability with biasedness. 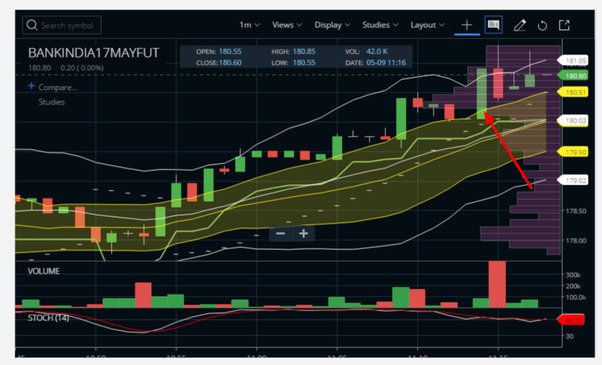 Hence, Low of this candle. 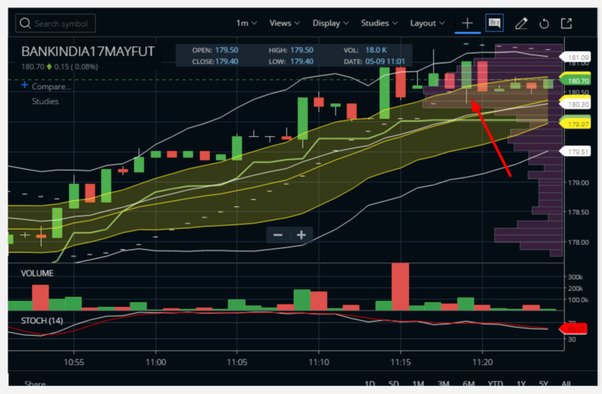 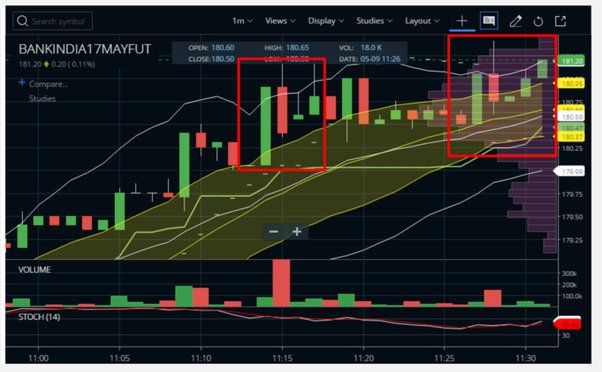 Well, it crossed it and we are standing on a 0.30 point of profit. It went out of upper band of 2 SD. Hence we close it immediately registering the profit.

Now again 181.5 will trigger blood downside based on price action. Well, in short, we are using price action to enter and exit based on Bollinger due to high volatility. 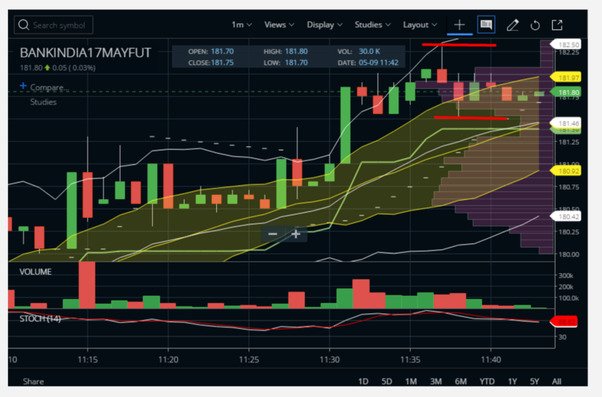 Well, we called it failed case of a 3BB breakout. We shall discuss it later on. It also does have two exit points. However anyways I use martingale in an F-3BB case which I have discussed earlier. So, in this case, I shall enter with two lots based on two exit points. 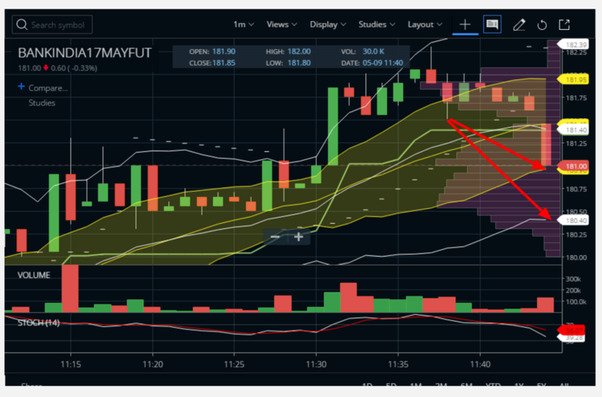 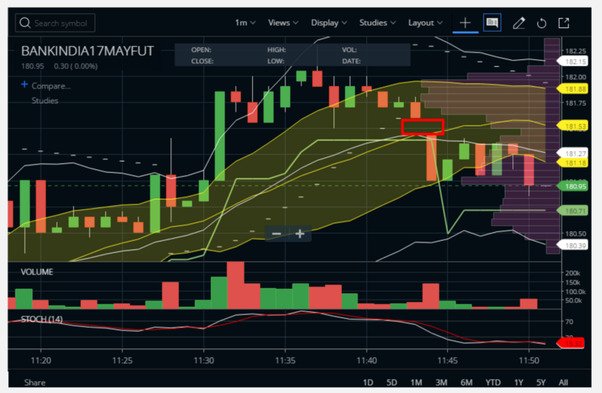 Well, we see a gap down here. We change our trailing stop loss hence to 181. 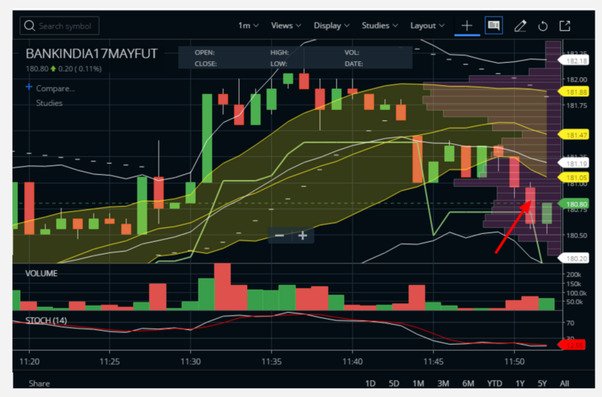 Well, not 180. Let’s say 181.05. Here is how I arrived at this point. You can see high of this candle on the above image – this candle has closure between 1 SD Bollinger and 2 SD Bollinger.

By closure I mean, High, Open, Close, Low lies within that range. So it is our trailing stop loss.

Sar triggered. Our stop loss here is the entry point but we shall keep 179.95 as stop loss. However, did you see the jump in price action? 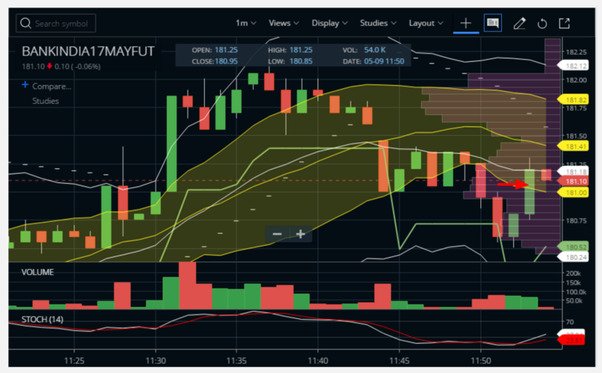 We have three targets here and hence three lots.

It hits the first target as well as the second target. But while approaching the third target it made a Doji followed by a green candle which gives confidence on an uptrend.

But we can see another Doji is happening. So we change our stop loss from “Upper Band of 1 SD Bollinger “ to the low of the green candle formed after the first doji.

We hit our stop loss and it opened a sell trade. But our first Doji’s trade got overlapped by the second Doji.

However, we can also immediately exit a trade seeing the Doji but lots of external things to be considered like Volume Profile Barrier, Bollinger, and other technical indicators.

Here is the Doji Trigger – 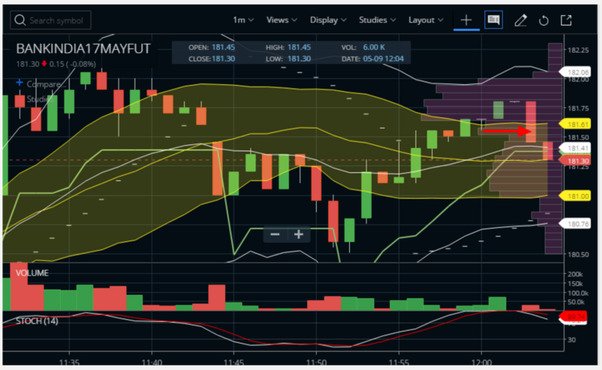 Now we have entered with three lots again.

Well, I rest my story here. You need a further introduction to price action, candlestick, Volume Profile to reach towards this level of candle-by-candle prediction.