So a useful way in trading with Bollinger Bands is to use them to identify trends. One standard cliché in trading is that prices range 80% of the time. Like many clichés, this one contains a good amount of truth since markets mostly consolidate as bulls and bear battle for supremacy.

Market trends are rare, which is why trading them is not nearly as easy as it seems. Looking at the price this way we can then define the trend as a deviation from the norm (range).

Let’s make the construction of an indicator close to Super trend with the help of Bollinger Bands. I want you to add another Bollinger Band in the top of the Bollinger Band you already have. Simply add one. But this time the settings will be

To avoid confusion and messiness, we make Channel Fill as No to previously plotted Bollinger Bands. Let’s open the Bank India May Futures in our trade setup. Also, colour 1 SD Bollinger as yellow to spot them better.

However, I am also using Moving Average Type as Simple for the 1 SD Bollinger to get a better exit. The 15 minutes time frame should look like – 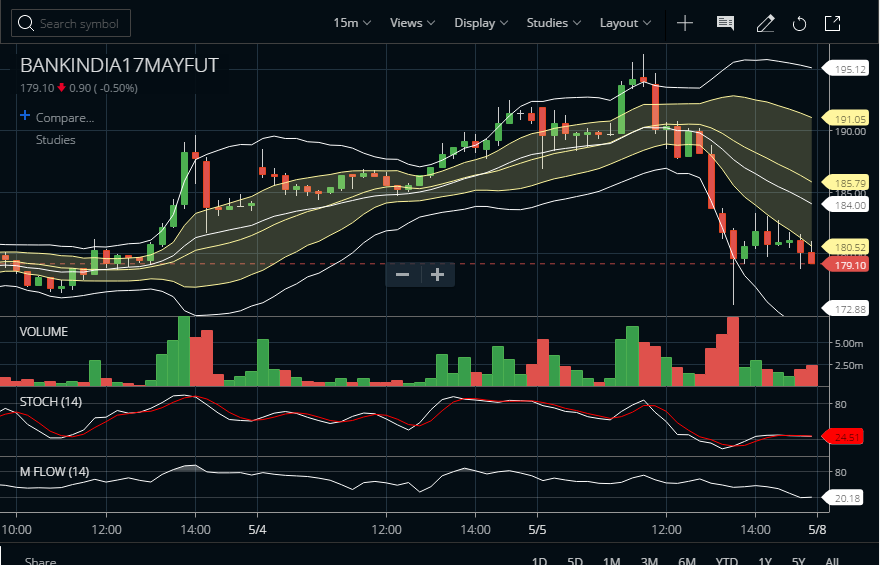 To spot uptrend and trading opportunity for a buy signal,

Here is another tricky condition to minimize loss (and well maximize profit):

Because it now falls under 3BB strategy which I have already discussed earlier with live trades. As usual, it has a high probability of breaking the median Bollinger with 98.5% confidence. 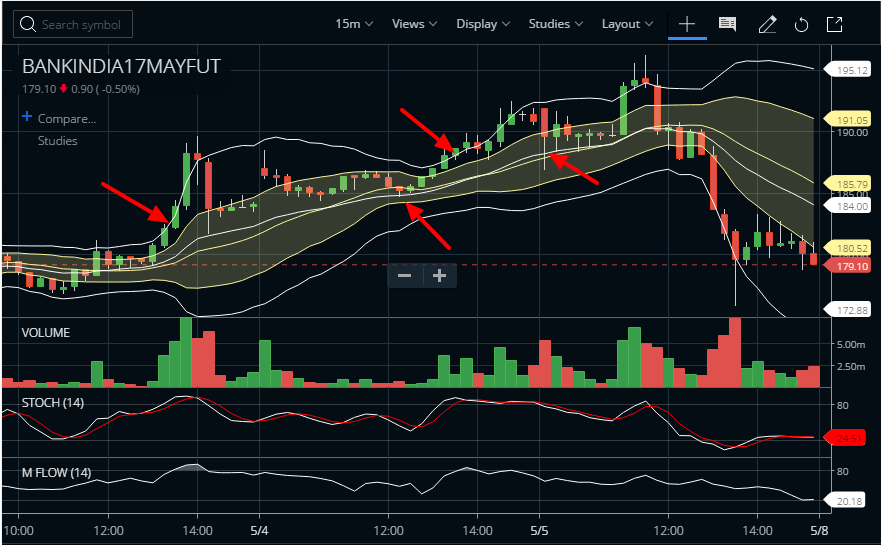 So the higher the time frame for this strategy; the better. Let’s name this strategy – Bollinger Ride Strategy (1SD – MA, 2SD – EMA) 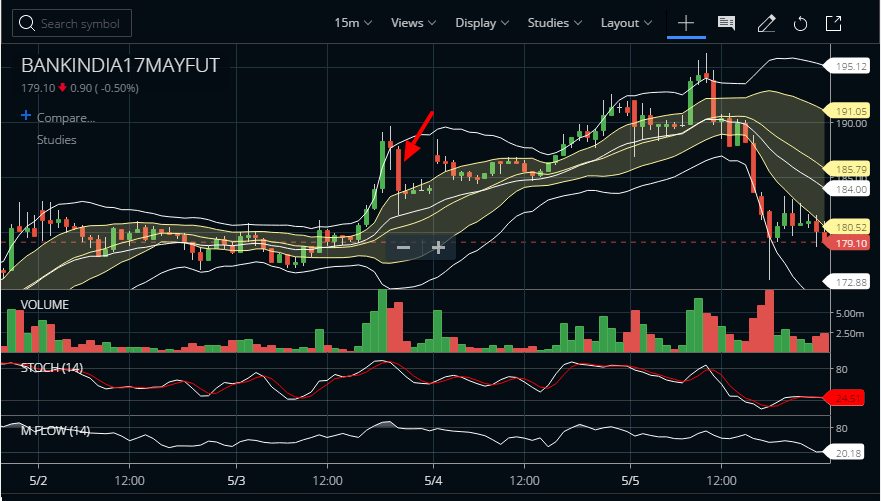 A. The red candle did not touch the median of 1 SD Bollinger though it touched the median of 2 SD Bollinger. (Refer above picture). EMA acts weird in volatile spike as it takes more weight of recently formed candlesticks. That’s why I rely on SMA as my exit strategy rather than EMA.

So you can also devise the vice versa method of spotting downtrend and generate a sell signal. However, if you do not consider the case of 3BB there are two trades – 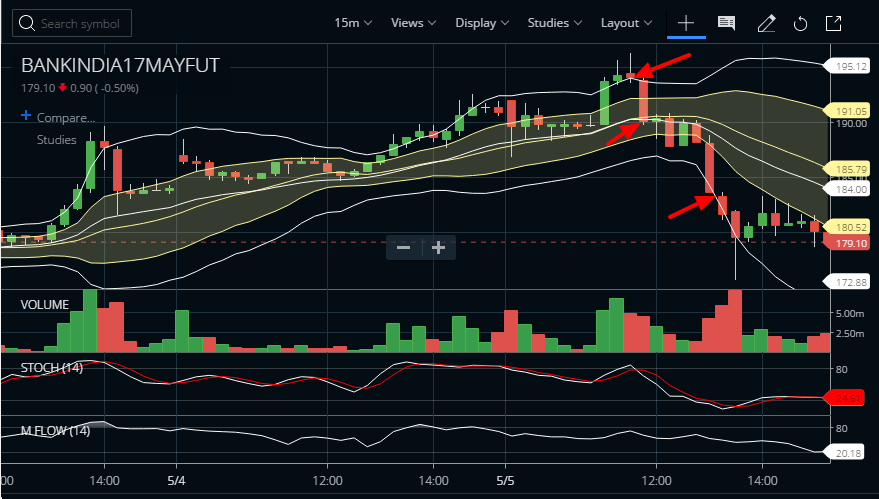 As you see the first trade went to loss.

The following sell trade is as of now open. This strategy is extremely dangerous (so is all breakout strategies) in lower time frames as mean reversion happens most of the time. So you need to be highly alert if you choose a lower time frame to day trade.

Also, do note the 3rd candle (where we have entered) is a red candle confirming the settings of 3 BB strategy setup. If you follow that with price action method as stop loss (it is shown with a live example of Titan May Fut),

Then here is your trade – 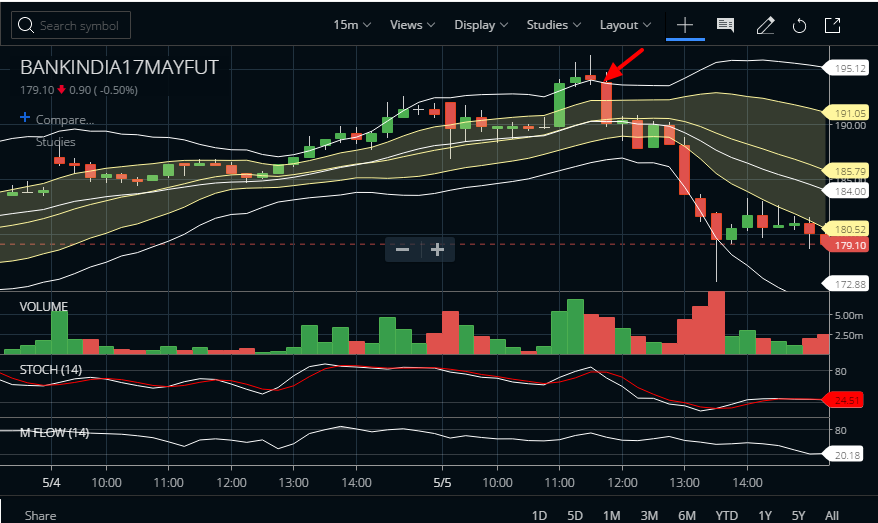 Here is one more setup with SunTV May Futures. Here you can see why I call the name 3BB instead of 4BB and 5BB. Also, you can see the reason why we are not exiting based on price action unless the trade setup led us to a 3BB opportunity. 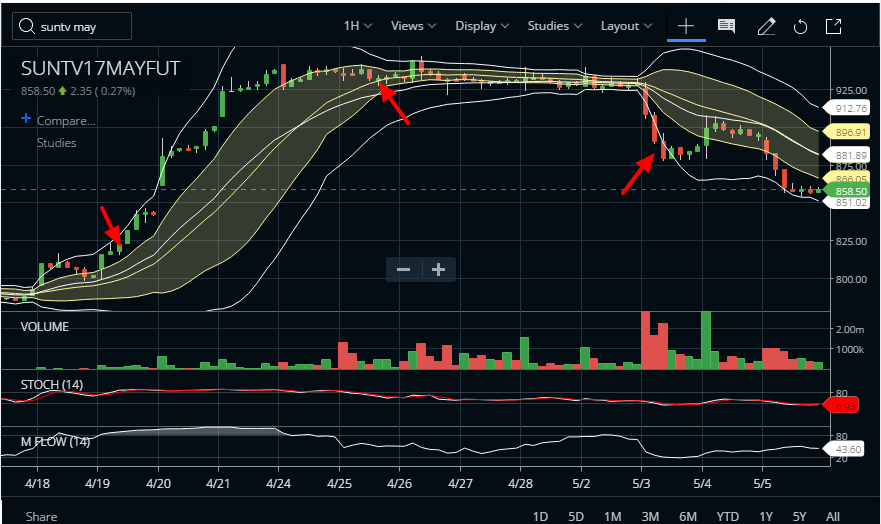